Jeremy Chua, a sixth-year medical student at the University of Otago, has had his first taste of life as a GP in rural New Zealand.

Each year, New Zealand medical students in their sixth year are required to complete an elective placement over 12 weeks.

The New Zealand Rural General Practice Network have taken advantage of this opportunity, while students are unable to travel overseas for placements, to promote rural communities and rural general practice where more GPs are needed.

With support from RHAANZ, Mobile Health and the University of Otago, the Network have put together rural placement offers for sixth-year medical students.

The placements include the opportunity for students to spend time in a rural hospital and the Mobile Surgical Unit – Te Waka Hauora along with their time in a general practice.

The Network hopes this initiative will increase the likelihood of students staying in rural areas to work after they graduate.

Jeremy says his interest in a rural placement was sparked after hearing about the rural GP shortage in New Zealand and after thinking about the possible career choices the experience would offer him in the future.

“I heard about the placements and I thought I had better jump on this opportunity,” he says.

Otautau Medical Centre was Jeremy’s first choice due to its proximity to Dunedin, where he lives and studies.

Jeremy began his placement in March and spent two weeks at Dunstan Hospital and two weeks in the mobile surgical unit, followed by eight weeks at Otautau Medical Centre.

Jeremy reveals that many of the important lessons he learnt from this experience are “not something that can be taught in the classroom.”

“One of the most valuable things I’ve learnt is that medicine is not just about diagnosis and treatment.”

“It’s things that you learn by being in the environment,” he says. 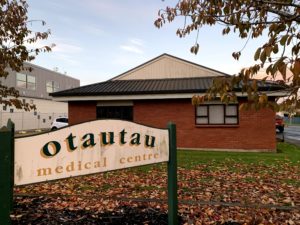 During his placement, Jeremy assisted in a few emergencies that he says he would not otherwise experience in an urban practice or hospital.

In one emergency at the Medical Centre, Jeremy says he took control and removed the patient from the waiting room to stitch up a large gash on the patient’s knee.

“I would be unlikely to have seen this in an urban practice setting,” he says.

“It gave me a good chance to have a look at what wound care is like at a place where you don’t have a big Emergency Department”.

Jeremy also had the opportunity to assist in a PRIME call in which a patient was unable to breathe.

He says this was another important experience for him in a rural setting where he learnt how quickly your day can change from one moment to the next.

“We can be flexible enough to say, ‘I have to reschedule my morning so I can respond to this emergency,’” he says.

Simply being aware of the rural environment was a significant aspect of Jeremy’s understanding of rural general practice.

“It’s recognising that we are far away from the nearest hospital so there is a higher threshold for doing what you can do yourself,” he says.

Elective placements, like this one, are not only an important part of medical training but they also benefit the practices and communities.

Otautau Practice Manager Natalie Carran says Jeremy fit in well with the team at the practice. 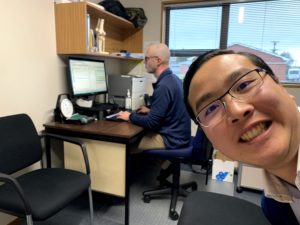 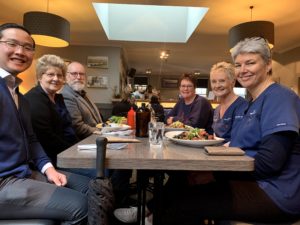 “We have been very lucky with Jeremy. He is very open-minded and has a good sense of humour.”

She says one of his biggest improvements is his growth in confidence which has given him more learning opportunities.

“He has taken a few emergency situations away from the doctors and led the role.”

Jeremy has also received a lot of positive feedback from the community, including one patient who “couldn’t speak more highly of Jeremy.”

This was Otautau Medical Centre’s first time hosting a sixth-year student for a 12-week placement and Natalie says it is great that they have been able to offer this opportunity.

She acknowledges that her practice is lucky to be able to teach a student with three GPs to share the teaching responsibilities, and without receiving funding.

The Otautau Community Health Trust generously paid for Jeremy’s accommodation for the duration of his placement. 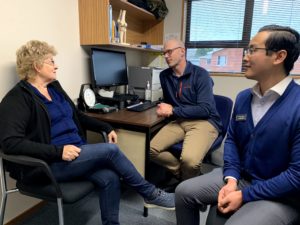 This rural placement has been an important part of Jeremy’s medical training and he says being in the practice gave him a snapshot of rural GP life.

“Getting a feel for the environment is important. Now that I’ve been here for a while, I can see what’s here and what life would look like,” he says.

Following his own experience in Otautau, Jeremy highly recommends a long placement in a rural setting for sixth-year students.

“I absolutely think that it’s a great experience overall to encourage them to work in rural areas.”

“If they don’t think it’s their future at least they get a chance to experience it,” he says.

So, what’s next for Jeremy in his promising career as a doctor?

“In terms of my long-term career, I think the mobile surgical unit made me much more interested in anaesthetics,” he says.

“Right now in my life, I probably wouldn’t choose to be rural GP. But fast forward to when I’m older and have a family, I wouldn’t mind settling down in a rural place.”

PrevPreviousBudget gives ‘no crumbs of hope for our rural health workforce’
NextSpotlight on: Dr Jared GreenNext