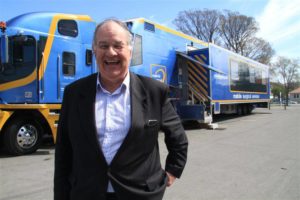 The 2021 New Year’s Honours were announced this week and the Network is delighted to congratulate members who received recognition for their contribution to rural health.

Among 13 doctors honoured was former Network Committee Chair and longstanding rural GP and leader Dr Tim Malloy as an Officer of the New Zealand Order of Merit.

Dr Malloy has been dedicated rural GP for more than 30 years and has been involved in practice leadership through the New Zealand Rural General Practice Network since the early 1990s.

As former Chair of the Network, Dr Malloy has overseen the development of the NZLocums scheme, the PRIME (Primary Response in a Medical Emergency) scheme and the ACC Rural contract.

He currently works at Wellsford Medical Centre, where he and his colleagues have developed a virtual multi-disciplinary integrated family health service to provide high-quality primary care to the local community.

Dr Malloy has been a powerful advocate for primary and rural health care, his patients, and GPs throughout New Zealand.

Dr Stuart Gowland has been honoured as a Companion to the New Zealand Order of Merit for his contribution to health and education.

Dr Gowland is known by many as the founder of the Mobile Surgical Bus, which has provided 25,000 surgeries in small towns across the country since its first bus was launched in 2002.

Throughout his career, he has practiced urology around the world and helped to establish Urology Associates in Christchurch, as well as launching the mobile lithotripsy service.

Dr Gowland has long been a passionate champion for rural health.

Hokitika GP Anna Dyzel has been recognised with a Queen’s Service Medal for her services to the community and health.

Dr Dyzel has been a general practitioner in Hokitika since the early 1990s. She has conducted research on growing a sustainable health workforce in Hokitika for doctors and nurses and developed standing orders for Rural GPs, which have been adopted by several District Health Boards around the country.

She is also very active in her community, and has been involved with projects for Girl Guides, Scouts, St John, and seeding community service opportunities for the Department of Corrections.

New Zealand Order of Merit awards are given to people in ‘any field of endeavour who have rendered meritorious service to the Crown and nation or who have become distinguished by their eminence, talents, contributions or other merits.’

See the full list of honours recipients and the full citations here.