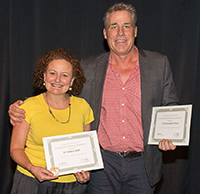 The 2017 Peter Snow Memorial Award has gone to Kaikoura GPs Dr Chris Henry and Dr Andrea Judd. The award was announced at a ceremony at the New Zealand Rural General Practice Network’s annual conference in Wellington on Friday evening, March 31. The pair were presented with the award by last year’s recipients Dr Ivan and Leonie Howie, both rural general practitioners on Great Barrier Island.

Drs Henry and Judd were nominated for their “Innovations to patient management under difficult circumstances”, following last year’s 7.8 magnitude Kaikoura earthquake (November 14, 12.02am).

In accepting the accolade, Dr Henry and Dr Judd, who are based at Kaikoura Health Care, paid tribute to the efforts of their wider team, as well as the various other community and emergency groups involved in the quake aftermath.

Dr Henry was in Kaikoura on duty at the time the quake struck and Dr Judd was in Christchurch when she heard the news.
“Once I realised the extent of the quake I rang St John and said I needed to get up there [to Kaikoura] in one of their helicopters and they obliged. It was an unreal scene when I arrived and something akin to a war zone,” she said.

“The new Kaikoura medical facility is the health hub in Kaikoura and there was very much a focus on that facility to provide health care as well as a reasonable amount of the social support needed. There were daily and constant interactions between the district council, civil defence, St John, district nursing and teams from Canterbury,” said Dr Judd.

Dr Henry said the medical centre was the very first emergency base until it was devolved and even afterwards it remained a key centre. As an unintended consequence it was about the only internet provider in the town that survived, so it was also a hub for all the businesses, who gathered at the health facility.

“We already had a community based team who arrived right after the quake. Admin staff for example just came in and collated extremely helpful data. We didn’t ask anyone to come in they just turned up and got on with it in spite of the fact their own homes were in complete disarray,” said Dr Henry.

“The District Nursing team knew most of the vulnerable members of the community and within minutes were able to check on them and get them out if necessary. Without that much
discussion we just split up and said ‘right, you cover that patch, I’ll cover this patch.’ You can’t do that if you don’t know the community well,” he said.

Dr Judd said the support from Canterbury was phenomenal and very, very fast. They had been through it and had this immediate understanding of what the complexities were going to be.

The pair also acknowledged the huge support from the network of rural doctors and nurses. “We were so confident in these people’s skills and they also practise medicine the same way we do.”